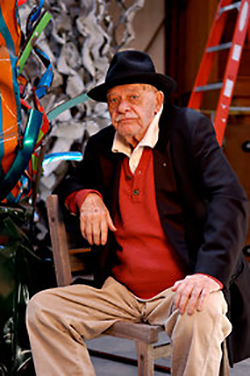 My father, we called him “Pops,” was my biggest influence without me even knowing it.

People don’t realize the amount of work that went into a John Chamberlain sculpture. It was way beyond wrecked car parts. Metal was folded, crushed, manipulated, painted, cleaned and cut. And not necessarily in that order!

Chrome car bumpers were cut, crushed and cleaned then laid out on the floor for Pops to pick and choose “his palette” as he called it. There were hundreds of parts to put together.

I learned from him that the bigger the palette, the more creative I can be.

Here are a handful of links to articles written about Pops – he was a maverick.