“Everybody wants to leave a mark in this world, one way or another. I’ve chosen a medium that I love to work with. It just suits my personality in a way. I didn’t choose to be an artist, it chose me.” Duncan Chamberlain, 2014 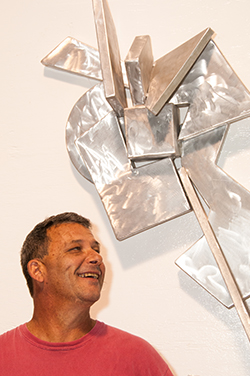 John “Duncan” Chamberlain was born into an abstract expressionist artist’s family in 1962. His father was the world-renowned scrap metal auto part sculptor, John Chamberlain, so he grew up surrounded by amazing metal sculpture.

From the time he was two until age 10, Duncan lived in Santa Fe, New Mexico. After his mother, Elaine, died, he moved to Manhattan, New York to live with his father. He attended Village Community School and then graduated from Elisabeth Irwin High School in 1980. He moved back to Santa Fe where he worked in masonry construction as a laborer and mason.

Duncan traveled to Sarasota, Florida in 1988 to visit his father. It was during this trip that Duncan decided Sarasota was the place to live. He started working for his father as an assistant – cutting, welding and fabricating parts for his dad’s work palette.

It was there at Chamberlain Studio that he met a beautiful woman, Janet. They married in 1990. Janet has two sons, Drew and Harry Edmonds, and Duncan and Janet welcomed a daughter, Elaine, in 1993.

Twenty-five years working side by side with John Chamberlain helped influence and move Duncan to begin sculpting on his own. He is now well on his way to establishing himself as a skilled and inspired metal sculptor. 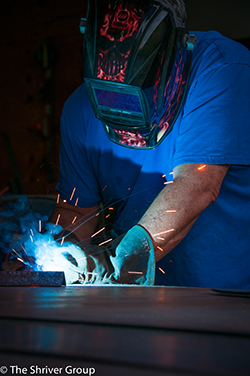 Read more about Duncan and his thoughts about sculpture and inspiration – Let The Sparks Fly.